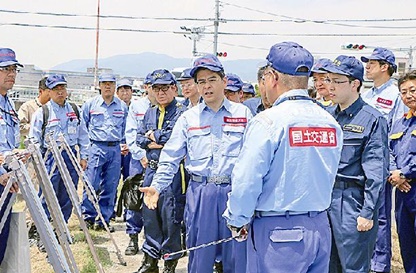 Minister Ishii arrived at around twelve-thirty at an elementary school in Takatsuki City, where a wall of concrete blocks collapsed, killing a girl on her way to the school. The minister then inspected a hole on the prefectural road caused by a damage on underground water pipes, as well as visited a river bank with a small crack.

At the meeting with Governor Ichiro Matsui and Mayor of Takatsuki Takeshi Hamada, Minister Ishii assured the government’s assistance for inspection of roads, rivers and concrete walls.
(2018/06/25)