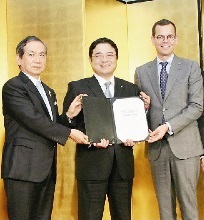 The New Kansai International Airport Company signed on December 15 a concession contract with a special purpose company formed by ORIX and Vinci Airports that have been selected as a preferred bidder earlier to operate the two airports in Osaka until 2060. CEO of the Kansai airport company Keiichi Ando, CEO of the SPC Yoshiyuki Yamaya from ORIX and Co-CEO Emmanuel Menanteau from Vinci spoke to the press after the agreement.

The concessionaire company “Kansai Airports”, established on December 1, has gathered investment from 30 Kansai-based private companies including Obayashi, Takenaka, Sekisui House and Daiwa House Industry. The SPC intends to improve the profitability of the airports by strengthening the facility, inviting low cost carriers, improving hospitality services for tourists etc. Kansai Airports will pay 49 billion yen a year for the concession. Total investment on capital such as terminal buildings development is estimated to reach 944.8 billion yen during the concession period of 44 years. (2015/12/17)