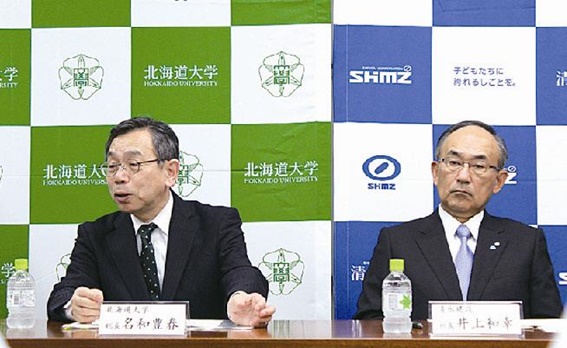 Japanese construction giant Shimizu and Hokkaido University launched a joint research program to develop a new construction material called “LogiX” which will substitute for reinforced concrete. It is aimed to invent alternative building structures which are able to overcome issues of concrete such as cracks and rebar corrosion. The three-year project is to be undertaken for three phases with a planned budget of 300 hundred million yen, with the first term starting this year which will focus on developing simulation system to identify how cracks and rebar corrosion occur. Shimizu will dispatch its two or three researchers each to six groups to be established at the university which provides knowledges on material research and cutting-edge analysis facilities.

President of Shimizu Kazuyuki Inoue told to the press on June 11 in Tokyo that he hopes for an innovative fruit of the joint research. “We would like to contribute to Japanese construction industry with a successful invention,” said Dr. Toyoharu Nawa, President of Hokkaido University. The new material is expected to be in practical use in about ten years according to Shimizu. (2018/07/12)