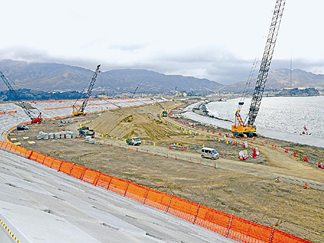 Japan commemorates the fifth anniversary on March 11 of the devastating earthquake and tsunami that hit northeastern Japan and left more than 18,000 people dead or missing. As the designated ten-year reconstruction period has gone halfway, the new reconstruction revitalization term will begin in April. While infrastructure has been reconstructed such as expressways on the coastal line in northern Japan, more than 170,000 people are yet to come home.

70% of the total 584 km reconstruction roads open or will complete soon and operation of part of the railways resumed. Minister of Transport Keiichi Ishii expressed his determination to wrap up the reconstruction works including infrastructure and residential development. The deadly disaster in a way was a trigger to recognize the importance of infrastructure and construction industry and help the ministry and the industry know what to do for the community.