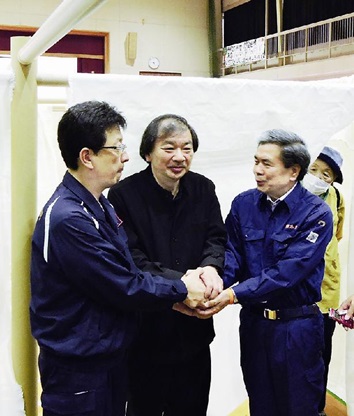 Mr. Shigeru Ban (in the center)

Kumamoto Prefecture and City office introduced on April 24 the partition system developed by Japanese renowned architect Shigeru Ban at the gymnasium of an elementary school in the city that has been used for emergency shelter for evacuees from the earthquake. The system consisting of paper tube frames and curtains can provide much-wanted privacy for the people who live in the gymnasium temporally. The prefecture and the city will apply the system to other evacuation sites in cooperation with Mr. Ban

The number of houses damaged by the earthquake that first hit Kumamoto on April 14 reaches 10,000 in the prefecture. More than 60,000 people have evacuated from their houses and stayed at 600 emergency shelters. As more than ten days have passed since the first quake, such issues as worsening health conditions of evacuees who are forced to sleep in restricted spaces or in cars and mentally stressful environment with no privacy secured have been major challenges facing the sufferers of the catastrophe. (2016/04/26)