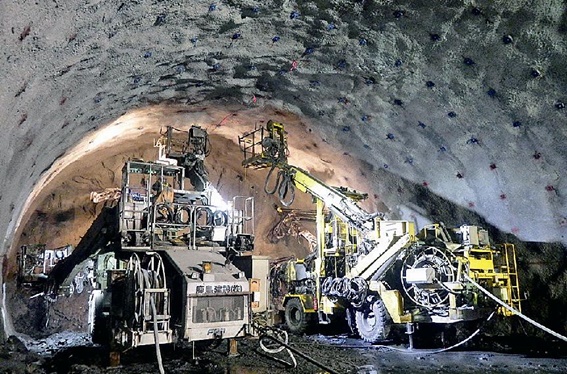 Japanese major builder Kajima Corp. announced on August 25 that it achieved a record 270 meters NATM excavation per month with 110 m2-plus cross section. Taking advantages of various technologies such as double-jumbo drilling machines and a new concrete spraying method, the firm successfully shorten the work period as well as improve the safety of the construction.

The Touni Dai San Tunnel which has been built by Infrastructure Ministry since 2014 is a part of the Sanriku Coastal Highway, a leading project of reconstruction from the 2011 Great East Japan Earthquake. The 3km tunnel is slated to complete in 2017.

With two drilling jumbos, enhanced quality of blast hole boring enabled to stretch the excavation with one blast, realizing the record-breaking speed of tunneling. Muck removal with two machines and a new concrete spraying machine improved the productivity as well. (2016/08/26)