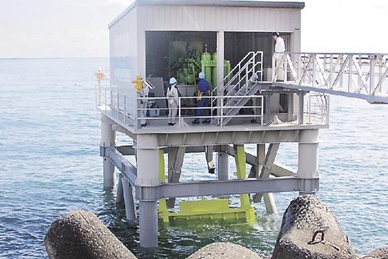 Tokyo University Institute of Industrial Science will soon begin operation of the nation’s first wind power plant in the Pacific Ocean in the northern part of Japan.

The 43kw system, floating on open water along the Sanriku Coast is to turn abundant wave power into electricity, which was installed on September 7 in preparation for connecting to the grid. The prototype was manufactured by a group of companies including Kitanihon Shipbuilding Co. and Hitachi Zosen Corp.

The project, funded by Science Ministry, has been conducted by a group of research agencies led by Tokyo University since 2012. The university will monitor the system and collect data for the next two years with an aim to develop larger sized power plant. (2016/10/07)